On November 23, 2009, a hero was lost to the world. At age 34, Staff Sergeant Matt Pucino laid down his life to free the oppressed. While on a combat patrol in the vicinity of Pashay Kala, Afghanistan, an improvised explosive device struck his all-terrain vehicle, thus ending this warrior’s mission. Assigned to Company B, 2nd Battalion, 20th Special Forces Group (Airborne) of the Maryland Army National Guard, Matthew was a Special Forces Operational Detachment-Alpha Intelligent Sergeant, earning numerous awards and commendations for bravery and acts of meritorious service. 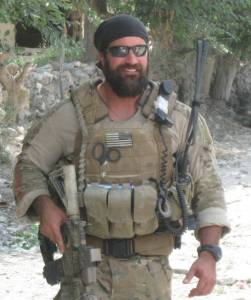 This custom event was developed to honor this hero and was known as GoRuck Heavy Blackbeard Tribute/Fundraiser. When I first heard about this event, I knew it would be special and to say it was an honor to participate is an understatement. 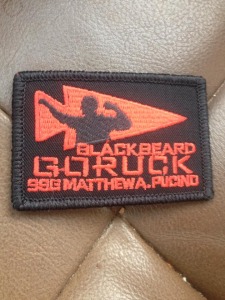 The cadre for the event were Jesse and Bert. I didn’t know Jesse, but before the event, it was clear the amount of time he put into the Facebook site for the team, it would be awesome (terrible?). Everyone knows Bert, so nuff said. 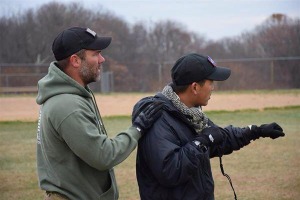 I am going to break this AAR into 2 parts, what happened, and lessons learned.

Upon arrival in Maryland, the team was pretty quiet during the ruckoff. A lot of nerves.

Lots of pre-work for this one.

1. Reading List-Matt’s Bio, From OSS to Green Beret-Aaron Bank, Chosen Soldier-Dick Couch, Abundance of Valor-Will Irwin
2. Know the Ballad of the Green Berets
3. Have a picture of Matt
4. Have something with his ODA on it
5. Make sure your bricks are wrapped “patriotically”

The team formed at the start point. Jesse and Bert made it clear real fast that this was not ranger school. They weren’t going to PT us to death (speak into the mike). Bert and Jesse were team mates in 1st Group and kicked in doors together downrange in CIF. It had been awhile since they had seen one another, so something else to make this event extra special. After the push and sit up portion of the PT test, off we went to a track to do the 12 mile road march. Initially, everyone thought the track was 2 miles and we would do 6 laps. After one lap, I knew it wasn’t 2 miles (no way I am moving that fast) and it was confirmed when Jesse said, “you have to do 8 laps now”. I think this got in some people’s heads. Jesse gave time hacks at half way and one lap to go which really helped. Everyone finished the road march under 3 hours. This earned us a 20 minute respite to prep our gear for the actual event to begin. 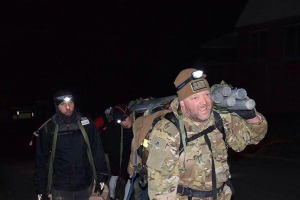 The next event showed the cadre bringing out an immense amount of material that we would carry for the duration. After appointing a team leader and giving them the mission planning packet, the magic chopsticks and most importantly, Matt’s beret, it was off to the races. I can’t tell you how motivating it is to carry something belonging to a fallen hero, in this case, his beret. Every time we passed it off, it reminded me of why we were there and motivated me to focus and finish. This evolution was straight out of SFAS. Build a cart with all this crazy hardware and move this 300lb sandbag and all your stuff to this point on the map. Not sure what they do in other events, but with the mission planning packet and the map, it was a great experience. The team made several versions of the cart. Another great thing about this event was that we had 2 SF guys from 20th group with us. Unfortunately, they were on no talking instructions. Eventually we got the cart moving, but of course not fast enough. This led to more reps of sumo squats (which I officially hate now more than burpees). After a visit from law enforcement (what would a GoRuck event be without one), our first helicopter extraction occurred. Now when I say helicopter, I mean the new US Stealth Helicopter that looks amazingly like a 5 ton tractor. After driving to our training area, said 5 ton decided to “break down”. 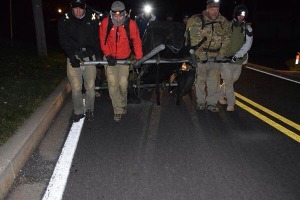 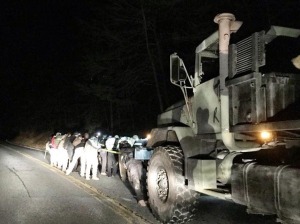 This led to us having to rescue the truck (or was it a helicopter?) and pulling it up a hill. Great team work exercise. Now that the truck was rescued, we came under sniper fire. Cross this bridge and stay below the top of the bridge. It actually wasn’t that bad until we took a casualty. Then it became lots of fun. Nothing like moving 400 meters in a bear crawl or on your hands and knees, dragging a litter with the team weight and a casualty. If we screw up, (inevitable) we go back to the start. Only once… 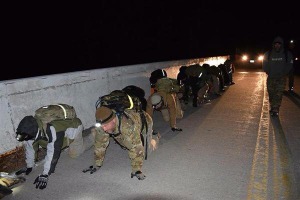 Now we find ourselves in the pitch black. Bert proceeds to tell everyone to take off their pants…all you hear is a bunch of zippers. Then he says, only kidding. We now get to do a tactical move. All of our junk gets put on the truck, and we reorganize for an actual tactical move. Okay, let’s be real, when I say tactical, I mean we moved without talking. 18 guys moving down a trail in the fall in MD sounded like the charge of the light brigade, but I know it was a different experience for most. We also had a Night Observation Device, or NOD. I got to be point man on this move with the night vision monocle. Of course Bert told me there were trip wires, which I believed him. After a few miles, we found a nice grassy clearing where we stopped and as a reward we were told we had 2 minutes to eat. Pretty much standard in a heavy that you collect all your food. We threw the bag out and proceeded to eat. How come when you eat a bunch of food, and there is less in the bag, it is harder to close? We actually beat our time hack and Jesse comes down and says “Are you guys done eating?”…us: “Yes”…Jesse: “eat more”. That was when my antenna went up. Eat more as in you are going to need more calories for what you are getting ready to do.

During the event, we had a vehicle with us (new SOP for Heavy). Bert is sitting in the vehicle across the road and he pulls over with his lights on illuminating the wonderful body of water behind us. All we needed was some epic music. Jesse now introduces us to the Peoples Pond. We have 2 minutes to strip, interlock arms, walk out, turn around and go “sub-surface” for 5 seconds. We of course don’t get it on the first try, but eventually we do. Out of the water get dressed and some PT to warm up. It was at this point Bert read us an email from his partner at Medical Training Group, Roland Paquette. Roland was Matt’s buddy through basic, AIT, and the Q Course, and they were of course best of friends. Hearing these heroes relate to one another is amazing. After you hear Roland’s passion through Bert, there aren’t too many weights you don’t feel like you can lift. 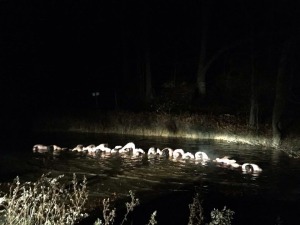 It’s my turn to be PL. Move down the road and find your next cache, marked with an IR light. A few miles later, bingo, we find it! What is it? Congratulations, you are the proud owner of a bouncing baby 1,000 pound log! I was dragging at this point, and just getting the log out of the woods proved to be a challenge. After some more sumo squats, I was fired. Leader changeover, now pick that puppy up and start moving.

Sometime the day before, I remember someone saying “All you have to do is make it until the sun comes up”. That proved to be true. As we were moving the log, amazingly, the sun started to come up. I couldn’t believe how quickly time moved. I thought it was only midnight! The cadre pushed us to make it to the top of the hill. Once we did, one of the shadows brought us Dunkin Donuts. Side note here, Shadows were awesome. Not sure who they all were, but Shadow in Chief was Larry Kuzela. His son Chris was doing the challenge. Larry was with us all night and did an amazing job and took awesome pictures. This of course leads to the first challenge, a food challenge. Bert: If you two of you can eat 10 donuts in 5 minutes, you can switch out for a lighter log. Challenge accepted, challenge won. Here is your new log, it only weighs 700 lbs. 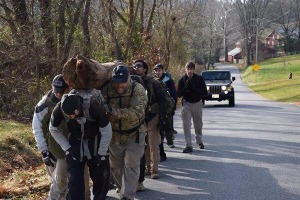 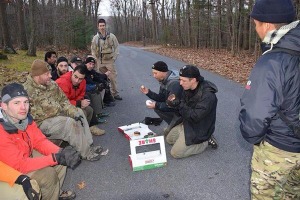 As we were touring the MD countryside, and meeting some of the neighbors, the weight was clearly getting to us. Of course Jesse was there to remind us “You asked for a Heavy!!”. Some of the other cadreisms: “This is a choose your own adventure event”, “Oh my Buddha” , “You are only half way done” (which of course is said every 15 minutes after the ¾ mark), “where are the chopsticks?”, “I have control, I have control, I have control, standby, execute, execute, execute”, and my favorite, “You are the only 18 people in the whole world (crazy enough to be) doing this…”

We pull into a rest stop (somewhere where we wouldn’t get hit by a car). Next up, lumberjack challenge. Cadre: “How much time will it take you to cut through this log” Us (stupidly) 15 minutes. Okay, if you win, you don’t have to go back in the water. We didn’t win, back into the water. Only this time, it wasn’t moving so we had to break through 1” of ice just to get in. Someone in the crowd lets out a “Please Bert No More”. Bert relents, get out, get dressed, sniper attack! Another bridge in crawl mode (this one wasn’t that long). Then we were looking for the final cache. Cadre: How long will it take, us:25 min. Okay, if you don’t hit your time hack, it’s back to the peoples pond. What do you think happened? Of course, we are getting wet again. Amazing how quiet it is as we are moving back to the pond. At least we didn’t have to break through this time. New twist, on your backs, flutter kicks. 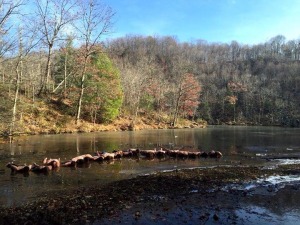 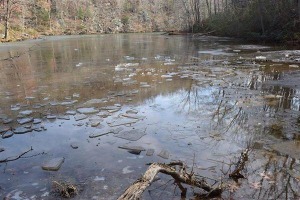 At this point, Bert says “how far away from the start point do you think we are?. About 12 miles. What a coincidence. You guys are moving too slow. You have now lost shoe privileges. Pack your stuff and start walking, we only have 12 miles to cover. What??? And don’t talk. What a quiet group of men moving down the road. After 2 miles, we hear the exfil chopper coming. This helicopter looks like the Ravens party bus. “You have 45 seconds to get on, or you can walk all the way back”. 10 seconds later, everyone is on the bus. What is that in the back of the bus? Operating taps? Oh sh_t! We pull into a local winery whose owners were gracious enough to host us. Many of Matt’s friends and family joined us. His teammates from his ODA were in Arlington laying a wreath on his grave. Jesse and Bert spoke some more about Matt and SF and then after the singing of the Ballad of the Green Berets and several toasts, the event was over. What an honor to participate in this event, and to have it end like this on the anniversary of his sacrifice, powerful. I think Blackbeard would have approved. 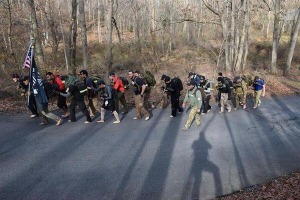 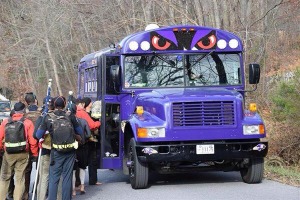 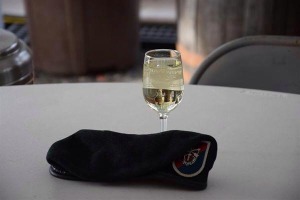 Kudos to Jesse and Bert for doing an amazing job. When you take off your GoRuck participant hat for a sec and realize the amount of planning and execution that goes on, this was a tough place to do a challenge. Also for letting us have a peek into their brotherhood.

Thanks to my Charlotte Team Spearhead brothers for getting me ready with Pathfinder Class 003. 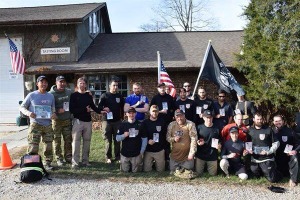