When I told everyone that I was going to this heavy, BTB said “you are skipping over the challenge and going right to the heavy?”. Yes that’s right, I have yet to do a good old fashioned challenge (is that a go ruck medium?). It’s not by choice, it’s just a scheduling thing. First lesson, don’t focus on heavy vs. light, vs. challenge. What I did was think about it like when I was in the military. What is the mission? In this case, carry heavy sh_t and put up with Jesse and Bert for 24ish hours as a team. That brings up the next lesson, don’t focus on the 24 hours. Someone said when I arrived at the Ruckoff, “all you have to do is make it until the sun comes up, then we are home.” That is kind of what I did. I broke it into 3 pieces surrounding the sun. Pre-sunset, when it was dark, and post sunrise the next day.

Next important piece, you hear it all the time, focus on the next task or evolution. Listen to the instructions and do your best to help the team accomplish the next task. You can’t think about what might be coming down the road. Sometimes, you have to focus on the next 100 steps. The cadre helped here with reward and punishment (i.e. if you can get that log to the top of the hill in 10 min, donuts!) but you have to do it on your own. Also, don’t fixate on the last evolution you sucked at. I got fired when I was team leader, I know I was dragging and so was the team. Learn from it, pick up the damn log and move on.

PT Test-if the team does well, the cadre will be in a better mood. Everyone on our team finished the road march in under 3 hours. I felt like when Jesse said good job, he meant it, and that bought the team 20 min of “get warm” time.

Make sure your head is right before you start the thing. For a heavy, that means 24 hours of focus. Make sure your family is well briefed and you are prepared for that duration. I actually just realized that this is a great opportunity to disconnect for 24 hours! I would never tell someone to quit, but if you are going to, do it intelligently. Reminds me of when I was in Ranger School and people would quit waist deep in the swamp. RI would say, OK stud, you are gone, now fall in the back of the file. They still ended up walking with us until RI changeover the next day! In our event, the quitters cash was just SOP meaning, where we ended up, it wouldn’t have helped you get back. You would have ended up either getting driven back to the start point by a shadow, or riding around in the support vehicle with one of the cadre. Our team mates who chose not to partake in the festivities post PT test left the team right at their vehicles.

Do the prework. We had a bunch of it. The cadre tells you to do it for a reason. Also, bring the stuff they tell you and keep track of all your equipment. One of the people who dropped, took are largest axe. When we did a challenge in hour 20 to determine if we would get wet again, if we had that axe, we would have got wet one less time.

For a heavy-wear or have some type of knee protection. I wavered on whether or not to wear fatigue pants, or my convertible pants. I wore the latter, my knees paid for it, and they were shredded at the end (Jesse/Bert 1, Pants 0). For my next heavy I will have more knee support.

Food-I packed M&Ms, beef jerky, 5 hour energy, Trail Mix, some other miscellaneous stuff and Peanut Butter (they have these cool little cups now). I also packed chewing tobacco. When it came time to eat, I ended up eating a little beef jerky and a peanut butter. We also shared among the team. I never touched the trail mix and over packed on the food. I also took Hammer Nutrition Perpetuem. I carried it in my jacket. I think I may have munched 3 tablets during various times of the event. I also took 3 Aleve, twice during the event and 4 Hammer Nutrition Tissue Rejuvenator once for my knee.

As far as packing, My gear is shown below. 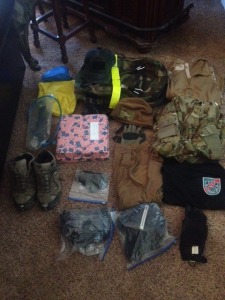 I had:
My ruck-A Gregory pack that was part of a 3 pack SPEAR issue.
PT belt-of course
Bladder-commercial-my military grade was in the shop.
Headlamp-I ended up using an Energizer one. It was OK, but not optimal, it would come off the head band easily.
Waterproof bags-anything I wanted to stay dry was in a Ziploc (bring lots) and then double bagged in the waterproof bags. I bought them cheap at Walmart.
Brick pack-35 pounds of love.
Boots-Merrels-you can see how the rubber was worn away on the top from those sniper attacks.
Socks-3 pairs, one heavy, 2 medium. Started with medium. Switched to heavy after the PT test, back to medium after the first people’s pond. I use the gold toe athletic socks. No blisters.
Shirts-I have two poly pro shirts. The brown one in the middle and the one at the top, which is a British under body armor shirt. I wore the middle one with the team shirt on the right up through the PT test and then the under armor shirt for the remainder of the event.
Skull cap-brown fleece. Wore during the cold of the night.
Baseball cap-worn when it was not cold.
Jacket-It is a newer ECWCS jacket. Lightweight overcoat. Worn during the entire event. Pockets on the sleeves were great for the Perpetuem and my headlamp when not in use.
Gloves-don’t know what I was thinking here. I brought 3 pairs. The green one’s in the middle were awesome. I picked them up at a gun show. I wore them the entire time. I brought some Grandoe’s and the black pair lower right thinking my gloves would get wet. I never used the latter 2. (overpacked)
Polypro/Fleece top-bottom-never used (overpacked)
Lesson learned-even when it is cold, you will be moving. Keep that in mind. Everyone was overweight on the dry ruck. Remember to take into account the weight of the ruck. Mine was 40lb dry, as was most of the team. 5 lbs on your back doesn’t mean much, but after 50 sumo squats, it matters.

Time hacks-Jesse is a strong believer in “choose your own adventure”. That means when the cadre asks you “how long will it take to do X” always double it, maybe even triple it. They are going to cut it down, that is part of the game, but I believe we would have spent a lot less time getting wet had we asked for more time.

Final piece of advice. Have fun! When you were a kid you would have killed to be allowed to stay out all night and roll around in the mud. Focus on what these events signify. There are lots of folks in dark places doing much harder things, usually where people are trying to kill them. Look at your team mate beside you and remember Rule 4-it’s contagious!