My friend and now Team SPEARHEAD member and Pathfinder candidate Bill Vernon is the Ninja Master for Team Ninja in Indianapolis. We did the Blackbeard Heavy together. Since this event was posted I kept my eye on it and when opening happened, as they usually do, I slipped in.

I was going to drive, after the “light” I am glad I flew.

This event was for the Riley Children’s Hospital, and Bill put on an excellent event.

Cadre Jesse was on tap, so I knew what we were in for. He will be at RLB 002, so you better get your dancing shoes ready.

After some quick contingency planning in the form of moving the ruckoff, we are off to the races. You know you are in for some special stuff when everyone is given a Santa hat to wear during the event.

The start point was Monument Square (or circle) right in the center of town. Jesse comes into the event wearing the Santa hat, beard and a ninja hood (which was restricting his breathing…)

After team introductions, he has us dump our bricks in the center. Bill and I had just been instructed to buy wrapping paper, now I know what for. Wrap your bricks, then pass them off to the left. I thought I was being smart by going with my “light” set of bricks. Good planning, now I am carrying someone else’s challenge set. Oh well, start moving.

Our team weight for this event was of course Santa’s sleigh filled with toys. Not sure how much it weighed, but the team did a great job during the event with 3 teams, large, medium and small. Our first time hack, move to this park 3 blocks away. One of the pre-work assignments was learning frosty the snowman. We tried to sing this perhaps 3-4…hundred times unsuccessfully. The Sumo Squat. Once we get to the park, everyone picks up a log. Uh-oh, now there is no one not carrying anything…poopy faces begin.

After a few more Sumo Squats, the team picks up the pace and we arrive at Arbys. Not for roast beef, but for the first annual Santa Ruck Grinch Tractor Pull off where we proceed to move a semi around the parking lot, and of course have a ninja dance party. Now the team is pumped, we move a few more miles and end up outside of a distillery.

This can’t be that bad, can it? If you have not seen the video, we now have 30+ rucktards semi-naked getting hosed down by tiny ninja master singing the theme from Frozen. Thank god the ladies can sing!

Afterwards, we adjourn to the inside of the distillery where after rescuing elf on a shelf, we have a memorial service for a local SF trooper killed in the line of duty, SSG Jeremy Wright. One of our team mates is his cousin, and Jesse had the team make a plaque. It was a great tribute. Afterwards, Travis, the owner, a former recon marine served us some warm stew. Great memories and we were all dry!

Now for the long hump with the sled to the hospital. The team pushed hard, did a great job switching out and 10 hours later (okay maybe it was more like 1.5 hours) we arrived at the hospital. All the kids were in bed, but some were peaking out the windows. After dropping off the toys, now we tie ropes to the sled and proceed to pull the mad disco ninja back to the start point. 35 reindeer pushing and pulling.

When we get about 300 yards away from the end, out comes the chocolate milk. Everyone drink everything your brought (some people brought half gallons?) and we will sprint back to the end (what did he just say?) Now imagine a sled streaking down a major street in Indy, damn the cars, full sled ahead!

We arrive back to a crowded start point, after learning there had been a protest there earlier, and people going WTF? Patch ceremony and back to the bar for some needed ACRT! Excellent event Bill and Team Ninja, a pleasure to have met you all.

Favorite quote: Cadre Jesse “Pretty soon this is going to turn into a challenge” (at about hour 6 of 7 hours) 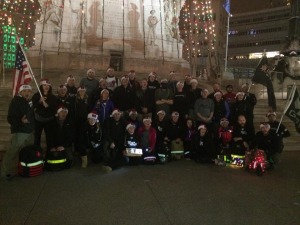 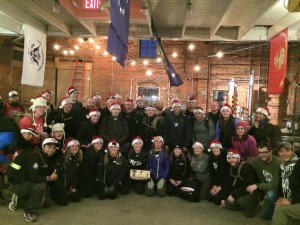 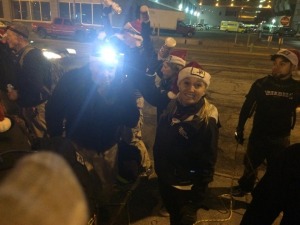 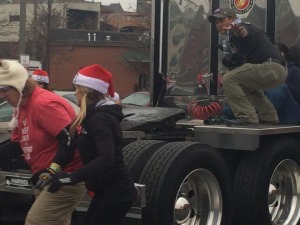 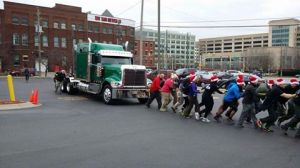 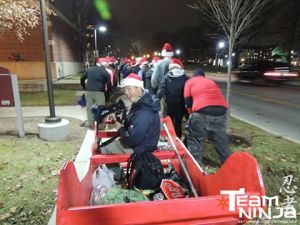 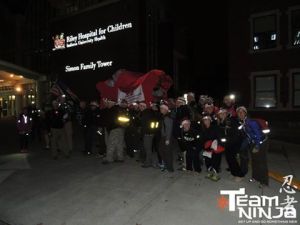 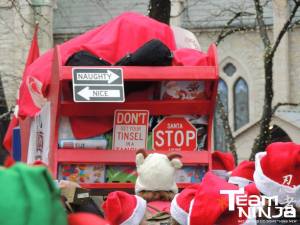 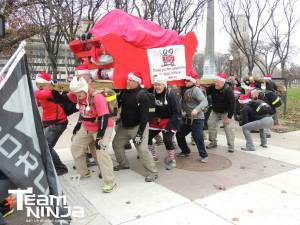 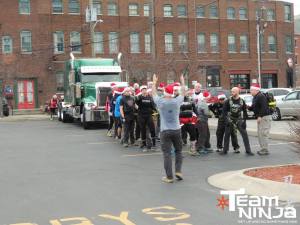 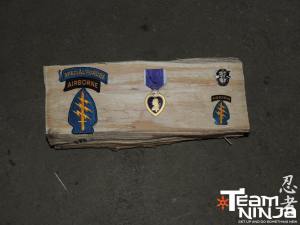 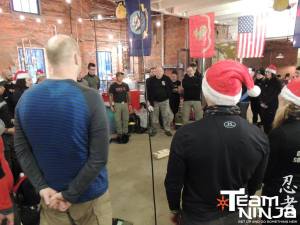 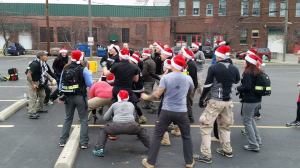 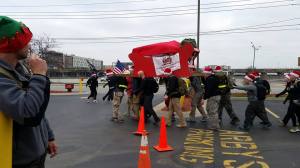 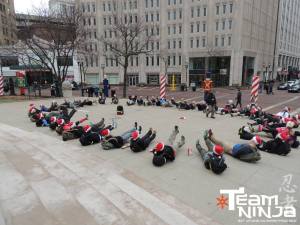