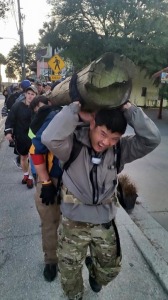 Where do they find these guys? Cadre Jesse mentioned that he was doing this event as a GRT at RLB 002. Me: “St. Augustine is only 6 hours away from Charlotte, hmm… I can drive”. Jesse: “See you there, it will be awesome”. Me: “Oh Sh_t”. (on the inside). Jesse has no need to do anything like this, but that is him leading from the front (as evidenced by the whole water burpee, 34 degrees in my pants escapade). I mention to Ninja Leader, Bill Vernon what is going on and he decides he will fly down and join the fun. This is going to be frikin amazing!!!

Now the great thing about doing an event with Jesse is you get 3 events in one. Pre-event, event and post-event. (Maybe Jason will figure out a way to monetize this?). You think it’s crazy when he is cadre, when he is a GRT it is worse (and by worse I of course mean more awesome).

Jesse is really big on the team communicating pre-event. If they do not talk to one another, they will pay the price at the event. So we started right away, team weight, flags, you name it, we were FB Messaging about it. About 3 weeks prior someone gets concerned that the cadre have infiltrated our event page. So our mission is to create a secret Facebook group (I didn’t even know these existed) and enter Dan Schwartz (aka Jesse). Now we invite all the GRTs over to that page and the fun begins again. We meet Andy Sziraki. Andy is the guy in the pictures below who looks like he can tear you in half (because he can). Next up is Mike Beck a true warrior also from South Florida. So off we go trading memes and plans on the now secret group. Someone thinks that Andy and Mike are really cadre. Bill and I vet them and we are OK for a little while.

Now what do you think happens when a cadre decides to participate in an event? An event that will apparently have 5 cadre (many of whom are combat divers) near the beach. (what is this, selection?). Predicted there will be a shark attack. Oh boy. Officially on tap are Cadre Bruce and Surf hog. Who knows what other cadre will show up?

We all arrive at out safehouse/team room and start to prep equipment. Off the the Ruckoff where Jesse, Bill and I meet Andy, Mike, Martin and Joe, and LEO Hero from Florida. It seems to take forever, but we show up at the start location.

Of course it is pitch black and the cadre are no where to be found. So we form up, 26 men and women on a semi-chilly night, ready for anything.

Bruce and Surf Dog finally come out of the darkness along with Garret Noon and Machine. There was a cadre shadow as well, Carl, who was a PJ.

So begins the welcome party. Empty your rucks, not fast enough, put everything back, take it out, bricks were supposed to be individual, mine weren’t. Duck walk, bear crawl, low crawl, tunnel of love, do it again. Surf Dog keeps undoing everyone’s stuff, everyone is yelling, but everyone still has a happy face.

Next stop, Bruce’s car. Everyone meet the burpee bomb. Basically a 8000 gallon barrel that belongs to Mrs. Bruce. Every time we drop it, 100 burpees. Oh boy. Here is your water and a few other toys to play with. Start walking. First drop of the burpee bomb, 2 min in. Going to be a long night.

100 yards down the road, Bruce makes big fat me a casualty. Everyone loved that. Get in the soft litter. As the team carries me down the street, my head keeps bonking the ground. I hope I don’t become a real casualty.

Now we are heading over the bridge towards the beach and our date with the sharks. This was an interesting challenge. We were jammed in the sidewalk, it was windy. Interesting move.

Once we arrive at the beach, after a quick bathroom break and water refill. We meet Cory. Cory means alot. Cory is Andy’s brother. He served our country and did 3 tours in Afghanistan. He passed away after returning home and Andy is a walking tribute to Cory. Honoring this American Hero and his brother makes carrying this log an honor. This version of Cory is a telephone pole that has a unique turnbuckle in such a convenient place. We take him down to the beach with us.

Now the moment we have been waiting for. Get it off, lock arms and get in the water. Now it is about 42 degrees and the water is about 70, not too bad. I take one step and I am in below my knees, one more step and whoa, I am in over my chest. Cadre: “Turn around and come back”. We move to the shallows and begin the flutter kicks. (what else, scuba geeks). Garret and Bruce are running around like two little kids and surf dog is wearing his swim fins (once again, scuba geeks). Now everyone up on the beach, SUGAR COOKIES, yay! Now back in the water. As we are settling in the water, a rouge wave comes and moves the whole class five feet down the beach. Okay, everyone out of the water. 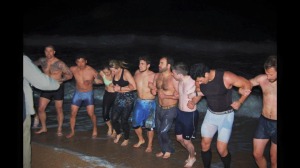 A night at the beach!

Some quick fire and maneuver on the beach, and some PT to warm us up. Now it’s time to leave the beach. Damn. Where is Jesse? That guy hardly says a word. (I know, hard to believe). He never comes out from under the log, he just does work. So now we are moving Cory back to St. Augustine. We make a quick stop at a yacht club for some PT. One thing that Bruce likes to do is that when you are in charge, you wear the chains of leadership. It makes an interesting twist.

I accidentally mention that I enjoyed being a casualty (yes I was a Blue Falcon). Bruce says, congrats, get on the hard stretcher. I was cramping up so bad at this point being on the stretcher was so much fun. 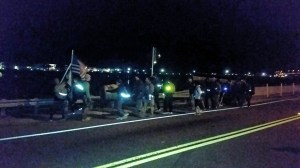 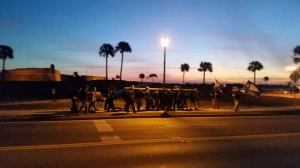 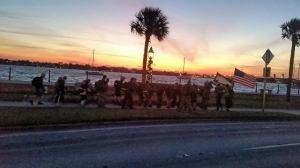 Are we there yet?

We stop at Dunkin Donuts, not for donuts, but for PT (and some cramp first aid). Another stop brings a resident out to scold us for our bad behavior. At this point we stop at the Fort in St. Augustine as the sun is coming up. After a moving tribute to Cory, we are off again. Bruce takes us to where he got married. Now all of a sudden I am in charge. Bruce says we have 45 min to move .7 miles to extraction, or we can go around again. Here is the twist, he starts making everyone a casualty. Now there is no one to sub on the log, everyone is carrying something extra, oh boy. 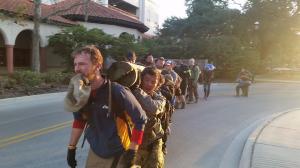 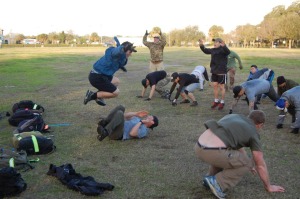 Now it is time for the ACRT. Bruce does a cool thing where he gives out MVP beers. Each of the Ninja/Spearhead team was selected as an MVP. 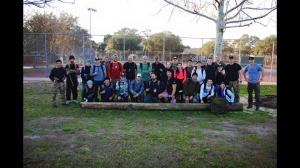 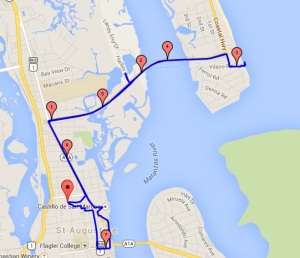 I am glad I was able to do this excellent event with Bill and Jesse and honored to call them my friends. Jesse puts his money where his mouth is and never stops. Bill left the event, got on a flight and rucked a half marathon. I went back to my room and passed out… 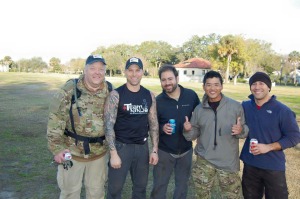 Bill’s recovery from the challenge

As a bonus, I was able to meet Mike and Andy for beers on Saturday night and we ran into some of our teammates from Fort Gordon at the same bar. 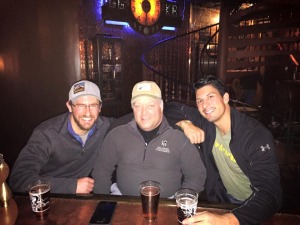 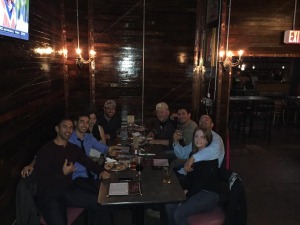